I’ve developed a love/hate relationship with Chrome Nanny. For those of you unfamiliar with this brilliant device, it is an extension for chrome that you can program to limit your browsing of certain sites. During the semester, I have it set to only allow me to check Facebook, Reddit, and other similar sites for one or two minutes an hour. When I use up my allotted time, it provides me with this gentle reminder:

When Chrome Nanny reprimands me, I am reminded of the frivolous nature of these sites. Why would I be posting pictures of my dog on Facebook when the article I’m working on remains depressingly unfinished?

The internal dilemma I feel between social media and productivity is nothing new. As Tom Standage notes in Writing on the Wall: Social Media—The First 2,000 years, people felt the same ambivalence towards coffee shops in the seventeenth century. When discussing the initial reception of these caffeine driven hangouts, Standage explains how “[n]ot everyone welcomed the freedom of speech afforded by the new social forum, and some people worried that its compelling, information-rich environment, which provided an endless and addictive stream of trivia, gossip, and falsehood, was distracting people from more productive pursuits” (104).

Over three hundred years later, the feeling that we are wasting our time by engaging in “non-productive” conversations is one that continues to plague us. Indeed, the nagging feeling of squandering valuable time becomes the topic of conversation in an episode of Seinfeld from the mid-1990s.

But really, can’t we have coffee—or facebook conversations—with friends? Is social media merely a distraction? Obviously there are aspects to social media that are unarguably beneficial. As Tom Standage notes, social media has the ability to spread news, spark revolutions, and create a global community. But what about the rest? What about the status updates of mundane daily activities and excessive pictures of food?

Despite the fact that we all may feel compelled to block or unfollow people who are constantly bombarding us with details of their lives, I nonetheless think that the type of connections this level of sharing provides is valuable, and not simply a distraction. Rather, I think social media allows us to talk about the inane details of our lives—to “have coffee”—with our friends and family regardless of the physical distances that separate us. And as Jerry, George, and Elaine remind us, having coffee with your friends may not be such a waste of time after all.

In his preface to A Better Pencil, Dennis Baron asserts that computers and other emerging digital technologies “radically [reshape] how and what we say” (xiii) and create various discourse communities that operate according to their own sets of rules, either written/explicitly stated or not. In Baron’s estimation, these discourse communities function like an online version of Foucault’s panopticon: “As discourse communities form themselves in cyberspace, we see a clear, self-regulating pressure to establish standards for virtual writing and to police and correct those who violate emerging norms” (xiii).

Although Baron focuses mainly on how such online discourse communities self-regulate acceptable language usage and general etiquette, I would like to apply his argument to how those communities also self-regulate the types of opinions that its members are allowed (or encouraged) to express.

In the chapter titled “Everyone’s an Author,” Baron seems to separate the kind of communities that blogs create from those on Facebook. For Baron, bloggers and their readers “constitute a community, even if they have nothing in common beyond the fact that they are reading a particular blog” (178), whereas Facebook depends on a system of communities-as-illusions, whereby users “accumulate collections of ‘friends’…without necessarily increasing the number of people they can count as actual friends” (179). What I would like to add here, though, is that the “pages” feature on Facebook functions in much the same way as do stand-alone blogs like WordPress, Blogger, or LiveJournal.  For instance, there are a multitude of fan pages on Facebook that are essentially a modified form of a blog: users can “like” or “subscribe” to such fan pages, follow the various updates and discussion topics, and thus become a part of that community of readers and writers.

With this similarity between Facebook pages and blogs established, I’d like to use an example from personal experience to illustrate how online communities self-regulate users’ opinions. I belong to several Pokemon-centered pages (ring the nerd alert) and a few weeks ago, a page called “pokelectronics” posted an informal poll about shiny Pokemon (regular Pokemon aside from their different color schemes and obscenely low encounter ratio) to see what fans’ favorites were. 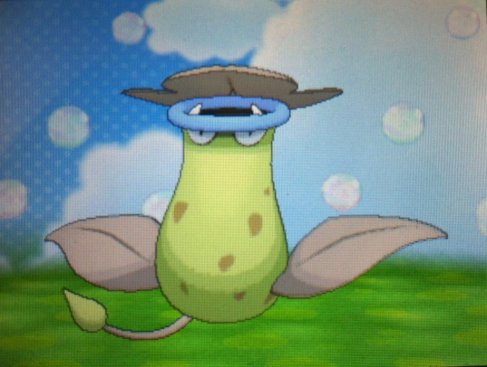 (Shiny Victreebel – the “regular” one has a red rim rather than a blue one; screenshot courtesy of deviantart, http://bit.ly/O1UDyW)

Even though I managed to capture the above-pictured Pokemon out of sheer luck, I still responded to the post saying that I thought shiny Pokemon were not worth the effort. Immediately upon posting my comment, I received almost twenty different direct responses attacking me. The most memorable was posted by a young male user, stating that, “That’s what people say who don’t have a shiny Pokemon,” which many of the other users “liked” to express their agreement. Since that incident, I haven’t posted on that page again for fear of another online witch hunt that favors the “hardcore gamers” over the semi-casual enthusiasts like myself.

But such vitriolic responses aren’t unique to Facebook. I remember experiencing similar moments during LiveJournal’s heyday when I used to post on a community dedicated to the reality show America’s Next Top Model, and I assume that the vapid subject matter naturally invited such catty responses.

Baron states that “the antitechnology side” faults computers because they “disrupt local communities and degrade the quality of modern life by isolating individuals from one another and tying them to machines instead” (178). Yet, the self-regulatory impulses of online communities as I’ve highlighted above generate a similar disruption and manage to isolate, nay ostracize, “individuals from one another” as well. To be a member of such an online discourse community is not simply to adhere to their rules about grammar and etiquette (for instance, many Poke-fan pages prohibit any heated discussions called “gen[eration] wars”) but also to submit to consensus, with which John Trimbur—a firm believer in the power of dissensus—would not agree (and nor do I). It would seem, then, that to be a true and good member of an online discourse community is often to be a victim of a cattle-call disease, unless you can develop both an acceptable writing style and a thick skin.

Privacy; it might not be the meaning but the notion of privacy that is being altered or redefined through the magical capacities of digital age. Private diaries that were used to be kept in the locked closets are being replaced by constant messages trying to share the most private moments of each individual’s existence with a group of known or unknown audience around the world.

Tomorrow, everybody should know what gift you receive today for Valentine’s, if not, you might not enjoy the gift at all. Moments are being shared before being lived. Feelings are being thrown away at the nearest or the farthest available distance before having being digested inside , to be liked, ignored or shared immediately. A collective public privacy is being created out of the collage that we are all making by contributing few seconds of our everyday lives. Right now, I might be thinking about the photo that I will share of my Valentine’s dinner, though I’m not feeling hungry yet.

The things that I miss most about Facebook are its usefulness as a means of passive communication/networking with friends and family far afield, but MOSTLY its function as a microblogging site with a friendly audience.

As a mom to three children, I realized that scrapbooking and babybooking as my mother and her mother did it, recording children’s heights and weights alongside photos and filling in the blanks of Baby’s first bath _____ and Baby’s first words _____  were not for me. Too hard to keep up, too time consuming. When my kids (now 9, 7, and 3.5) say something  funny, I am just as likely to forget it as I am to remember it to write down in some pastel colored baby book gathering dust in the guest bedroom.

Facebook provided an accessible and easy to update forum or platform for me in which to record and instantly share my progeny’s funny, witty, poignant, or curious statements and questions.

One thing I didn’t like about Facebook’s pervasive reach into my life is that I started hearing snippets and planning to put them on Facebook, rather than sitting in the moment and hearing / responding to my child’s words and thoughts. This, in part, is why I am finished with Facebook.

As technology becomes more widely accessible, the aesthetic of the web changes. When the web was young, websites included flashy banners, beeping icons and dancing babies, simply because they could. People were showing off the ways that they could use the technology available to them, and this was considered aesthetically pleasing. Once everyone was able to use these objects of flare, however, their aesthetic value dropped significantly. Now coming across a website that does something as simple as play music (without permission) is considered accosting.

Somewhat paradoxically, the web has adopted a simpler, cleaner aesthetic now that everyone has the ability to make things as garishly flamboyant as they desire. In 2007, myspace pages frequently featured custom themes and backgrounds that people used to express both their individuality and their many interests. But now, most twitter and facebook pages opt for uniform designs that only distinguish themselves from one another with one self picture.