When thinking about the changes brought about by Web 2.0, the first thing that sprang to mind was identity, but a close second was aesthetics. Perhaps this is more reflective of my own personal priorities (and research interests) than anything more truly comprehensive, but I think that the two always go hand in hand in person so it follows that they do in our digital manifestations too. Carefully curated, these identities become abstract portraits of the people we imagine ourselves to be—or wish we were—partly through the faces (metaphorical and literal) we choose to present, and partly in the genre of writing that we choose to narrate ourselves. For instance, as anyone who interacts with my Facebook presence knows, I delight in posting extended reflections, excerpts from what I am reading, and entertaining anecdotes; for me, this type of longer writing feels natural and meets with my own standard of written aesthetics. And what is so wrong about meandering in text or occasionally deploying purple prose to make a tongue-in-cheek point?

Perhaps for these reasons, I have (so far) avoided more streamlined and pithy social media platforms. I appreciate that the greater concision demanded by Twitter is in part an exercise in precise writing, but I don’t like the constraint. I understand that the purpose of hashtags is to link conversations and weave connections between post(er)s, but too often they just seem banal. Can the aesthetics of digital writing encompass both short forms that reach out to other writers by means as simple as #sunnyday, as well as longer, less digitally-native genres that fail to link in the same way because they require a different approach? Can’t so many short snippets be just as visually (un)appealing as a block of text?

As I’m interested in how things are rewritten, I am naturally interested in how rhetoric has changed in a digital format. What immediately comes to my mind is Tumblr. On Tumblr, people (of nearly any background you can think of) will often post a mix of written thoughts. They are often personal, but they are also often academic, political (based on reactions to legal changes, scientific discoveries, any and all pursuits). While some of these posts put forth the academic style I am most familiar with when I read about, say, a recent Shakespeare adaptation, more posts employ vastly different rhetorical strategies, born from the web and raised on tumblr. A piece in Shakespeare Quarterly will likely employ a highly formal, academic tone. It will generally be free of charged emotions. You know the deal.

A Tumblr post is different. On Tumblr, you might get the same or nearly equivalent message (thesis – argument – project). What you will also get, however, is maybe an embedded video clip, more often a gifset, or a captioned photoset. Spelling is unimportant. Capitalization is even less important. In fact, a post with proper spelling, grammar, and capitalization looks suspicious on the site. It’s much more common to see (in all caps) “OMFG LET ME TELL U ABOUT THIS FILM. so it starts off….” The tags will take the emotions to the next level. The nuanced analysis stays the same. There is the same focused attention to detail based on argument, but these are personal blogs. And the personal elements remain.

Rewarding/Frustrating/Funny: Describe a recent experience you’ve had with writing online that fits one of those categories. Use this story to introduce yourself to the class.

Writing in a digital age 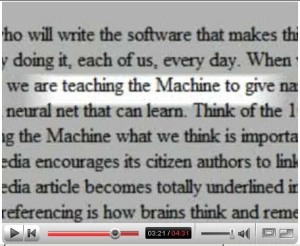 Michael Wesch, The Machine Is Us/ing Us

Near the end of his video essay, Wesch lists a number of terms and concepts he feels we’ll need to rethink in a digital age, including:

Wesch composed and posted his essay in 2007. Pick one of the terms on his list and, in a fastwrite, see if you can point to some ways in which its meaning has shifted since then.

Aims and structure of this course